Super Moon in the Redwoods

Ixchel came into consciousness through the ancient Mayan people.  The Mayan’s were mighty warriors and amazingly advanced astronomers. They had many Gods for different aspects of life, but only one Goddess, Ixchel.  She presided over healing and midwifery. In ancient depictions she is portrayed as a crone wearing a serpent crown on her head, with a walking stick in one hand and a basket in the other.  She is portrayed as a crone to show her wisdom, the serpent crown symbolizes her kundalini serpent, powerful and awake, the basket because she is a great weaver and the walking stick a wand.

On this most auspicious night, Super Full Moon and Lunar Eclipse, we cast our circle outside the home of Jennifer Gray in a magical meadow among the giant Redwoods.  At twilight, when the veil is thin between the worlds, we wrote powerful healing words on green fabric hearts. We then braided them into one long string to weave together a super charged prayer flag in honor of Ixchel, the Mayan healing moon Goddess.

To strengthen our connection to Ixchel, wise Dragon Crone (Amy Sullivan) lead us in a kundalini activation movement. This awakened the sleeping serpent coiled at the base of our spine. Time to clear our chakras through meditation.  We spread our blankets and laid down on our backs.  To the beat of her Shaman drum, Amy lead us deep into our bodies, focusing on each chakra, one by one, opening and clearing.  Feeling our kundalini power rise upwards while we were connected deeply to Mother Earth brought us to a state of nirvana. Upon returning from that mystical journey, I opened my eyes and saw the first star of the night in an indigo sky surround by the silhouette of Giant Redwoods. Of course I made a wish.

Fully present on every level, each women spoke of her healing actions in this world.

“The world will be saved by the Western woman.”

As I listened to the ladies in this circle speak of how they heal and who they mid-wife, I had a deep feeling that it is true – the Western woman will save the world. 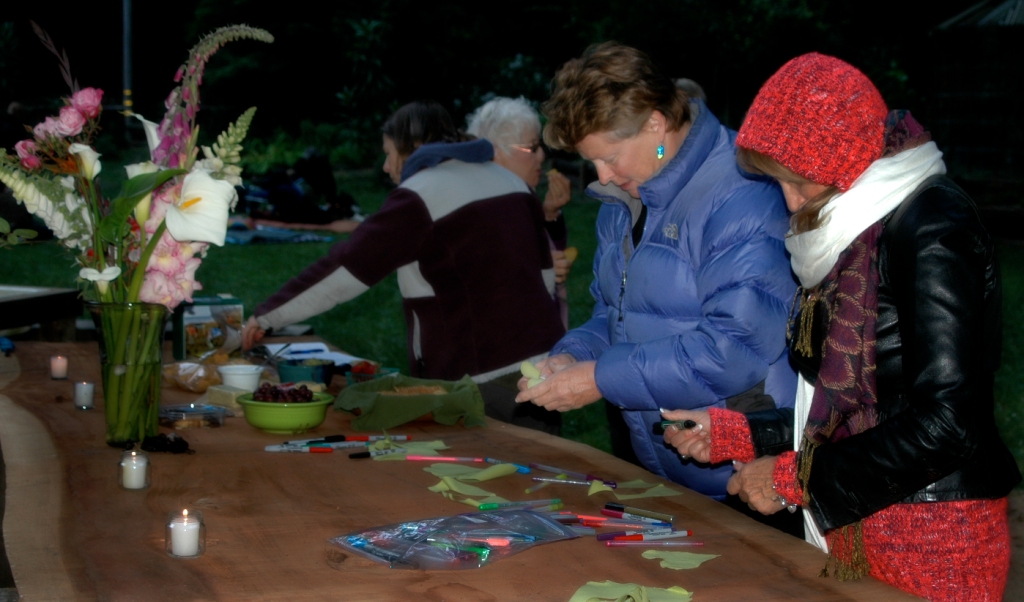 Enjoy these last few weeks of Spring.  Hope that all your seeds are sprouting and blossoming.